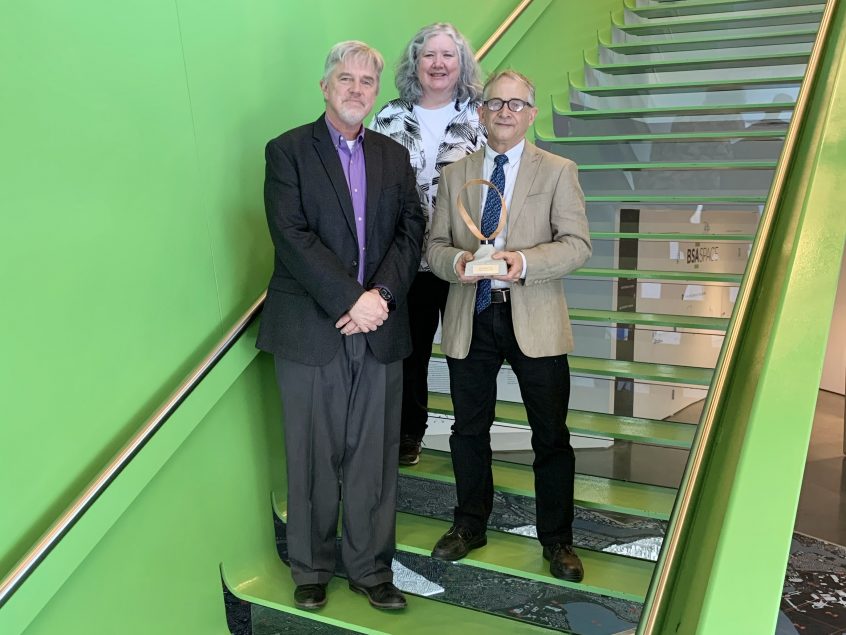 JAN. 27, 2022 – The Cambridge Housing Authority (CHA) has been informed by the Boston Society of Architecture (BSA) that as a finalist, and first-ever affordable or public housing development to be nominated, for their annual Harleston Parker Medal, CHA’s Jefferson Park property in North Cambridge has won the People’s Choice Award in the public polling portion of the voting process.

According to the BSA, the award was established in 1921 in memory of Boston architect, J. Harleston Parker. The first medal was given in 1923 and it is their highest honor, recognizing “the most beautiful piece of architecture, building, monument or structure within the City or Metropolitan Parks District limits.”

“With the receipt of this award — the people — our residents, our neighbors, and our co-workers have spoken. The message was loud and clear; beauty belongs to everyone and should not be limited to only those that can afford it. For me personally, it was an honor to see these affordable homes, built from 11 years of hard work, and the vision created by Abacus Architects, recognized for such a prestigious award.” said CHA Executive Director Michael J. Johnston.

The CHA Planning and Development team and the staff members from the CHA’s Work Force youth program, respectively, hosted the award jury when they visited the site in December 2021, and had the opportunity to share how transformative the units, the Work Force space, and other community spaces has been to the resident community.

“Congratulations are still in order for being a finalist,” BSA said in an email communication to the CHA. “The Jury commends you and the Cambridge Housing Authority and City of Cambridge for not only the architectural design, but also addressing social issues with this project and community.”

Jefferson Park is a $51 million redevelopment of CHA’s state public housing development. Plans included the demolition of 108 units of obsolete housing, to be replaced with 104 units of newly constructed, deeply affordable housing subsidized through by an allocation of project-based vouchers provided by CHA. Construction started in January 2016 and was completed in August 2018 at this award-winning site. The design effort was led by Abacus Architects + Planners.

For a video tour of Jefferson Park, click here.

About the CHA: Established under state law on December 9, 1935, Cambridge Housing Authority (CHA) provides long-term rental housing and rental assistance to more than 5,500+ low-income families, elders and disabled individuals through its Public Housing and Housing Choice Voucher (HCV) Programs. CHA invests in Cambridge families and provides enhanced support to almost 10% of the city population. By focusing on policy innovation and family economic opportunities, CHA meets its mission: to develop and manage safe, good quality, affordable housing for low-income individuals and families in a manner that promotes citizenship, community, and self-reliance in one of the most expensive housing markets in the country. The Affordable Housing Accreditation Board (AHAB) has awarded national affordable housing accreditation to Cambridge Housing Authority in Cambridge, Massachusetts. The Cambridge Housing Authority is the seventh affordable housing provider to receive AHAB accreditation. The designation of “Accredited Affordable Housing Organization” reflects an organization’s commitment to meeting high performance standards established by the affordable housing industry and to providing quality, well-managed housing.

About the BSA: The Boston Society for Architecture is a diverse community committed to improving the quality of life for everyone through architecture and design. The BSA operates as a convener and catalyst to ensure that the power of design is fully understood and valued as an essential tool in ensuring Greater Boston is a beacon for equity, environment, and advancing architecture. The BSA is located at BSA Space. BSA Space features more than 5,000 square feet of gallery space for creative explorations of the potential of design to inspire, create community and transform the world we inhabit. BSA Space is also home to the BSA Foundation (formerly the Boston Foundation for Architecture). Established in 1867, as a member-led association, the BSA is one of the oldest and largest chapters of the American Institute of Architects (AIA) in the United States.

Video Tour of Four CHA Properties, Come on in!