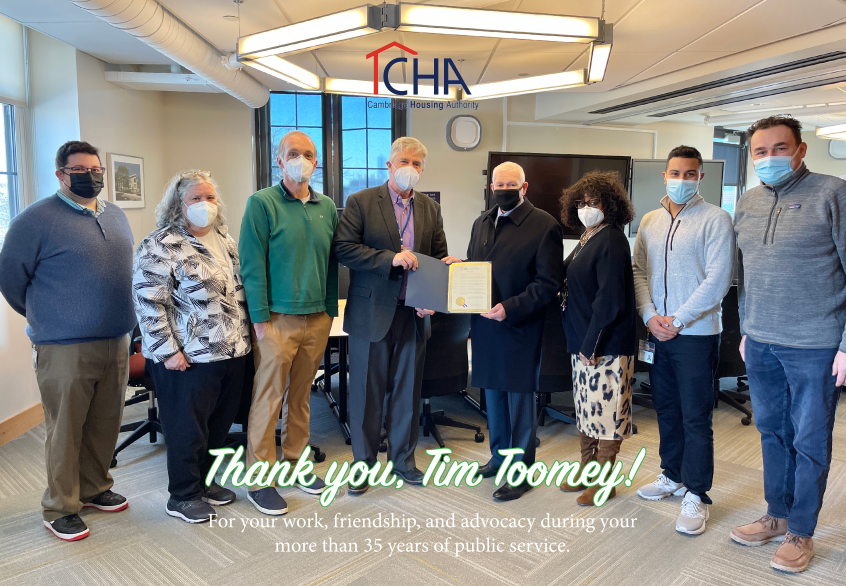 In June 2021, Toomey announced he would not be seeking another term on the City Council for January 2022. Toomey was first elected to the Cambridge City Council in 1989, demonstrating a strong ability to connect with residents across the city, especially in his native East Cambridge. Within that span, Toomey also served 12 terms on the state level as a State Representative in the 26th Middlesex House District covering East Cambridge and East Somerville.

During his tenure in public service, Toomey became a relied upon source for constituents living at CHA properties. Through these interactions, Toomey was also able to build a strong and lasting rapport with various members of the CHA personnel team.

“I will never forget how instrumental you were in keeping affordable housing in East Cambridge with Truman Apartments,” CHA Planning and Development Director Margaret Moran said to Toomey during his visit. “You really went to bat for us and made a huge difference.”

Prior to presenting the resolution, Johnston held up and referenced the agency’s Stories of the Can’t Wait List publication from 2021 highlighting the plight of finding affordable housing in Cambridge, “These are the people you’ve been fighting for, these are the people you’ve made a difference for, this is why we do the work. You get it. It’s for them, and you never lost sight of that.”

In a light-hearted moment bringing many smiles, Toomey reached into his coat pocket and responded, “Well, I actually brought a list of items here that I would like to discuss afterwards on behalf of some of our residents.”

Toomey may now be professionally retired after an incredible career as a public servant, but his passion for constituent services remains uninterrupted.