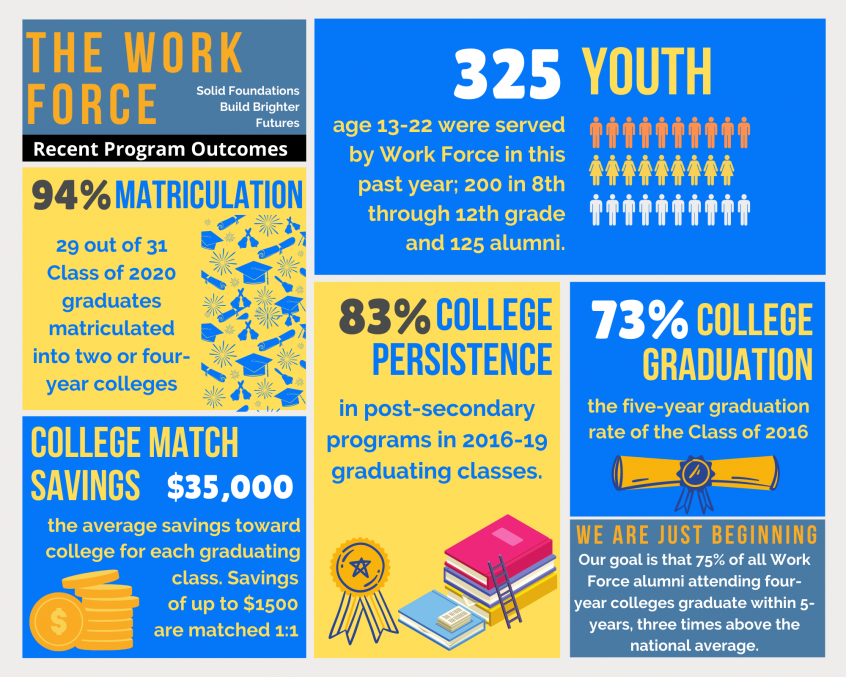 CAMBRIDGE, MA – The Cambridge Housing Authority (CHA) today announced the launch of an endowment aimed at creating a sustainable funding source for its nationally-recognized youth development program, The Work Force.

The Cambridge Community Foundation will manage the new fund. The CHA is seeking to raise at least $1.5 million from outside sources over the next several years to build on a generous initial gift of $500,000 from a private donor.

The endowment will provide sustainable income to support the CHA’s Work Force Youth Program, an innovative educational enhancement, college prep, and job-readiness program that assists low-income youth in attaining the early assets necessary to build generational wealth and to enter the economic mainstream. Serving over 300 teens and young adults annually, the program provides broad developmental supports to participants over an unprecedented eleven-year span: from the 6th grade through high school, and for the duration of each participant’s college degree program.

“By fostering participants’ personal, academic, and professional growth, Work Force empowers youth to create their own pathways toward self-reliance, increased opportunity, and sustained economic mobility,” said John Lindamood, Director of Resident Services at CHA. “Over the years, we’ve proven that providing participants with the comprehensive support and skills they need for long-term success will lead to remarkable outcomes, including positioning them to acquire a college degree with less debt, and to move up and out of subsidized housing. The need for that support is rapidly increasing, and the launch of this endowment will ensure that we’re equipped to meet it.”

To date, CHA’s Work Force Program has generated a remarkable history of success, including:

“Finding and funding innovative programs that help people meet their full potential is part of the Foundation’s mission, and we’ve been long-time supporters of this model program because of the incredible impact it has on the trajectory of our young people,” said Geeta Pradhan, president of the Cambridge Community Foundation. “We are pleased to partner with CHA and with our city’s committed donors to build an endowment for the Work Force program, leveraging the power of collective giving and ensuring the wellbeing of future generations.”

The CHA has been a regional leader in the youth development field for decades. “We know that a deep investment in our youth today will lead to better outcomes tomorrow,” said Michael J. Johnston, Executive Director at CHA. “For more than 30 years, the Work Force program’s innovative design has changed the trajectory of countless young lives. With the generosity of a private donor, we now have an additional tool that will help us to protect and build upon that legacy and allow us to make an even greater impact among our youth in the coming years.”

While CHA has sought financial support from outside contributors over the years, its Resident Service programs have historically relied on the agency’s general budget to account for roughly one third of their annual budget. Since 2010, federal funding for public housing has fallen by nearly $2 billion and projections indicate that the pace of decline will continue to accelerate.  Combined with steady reductions in state funding for public housing, this decrease makes it increasingly challenging for the CHA to maintain both their profoundly impactful programs and high quality public housing.

Thanks to private foundations such as Herb and Maxine Jacobs Foundation and private donors, CHA has been able to support the Work Force Program as state and federal funding have become less available.

“Our foundation has donated to CHA for over ten years because of their effectiveness at breaking the cycle of generational poverty,” said Jill Jacobs and Carl Whittaker from the Herb and Maxine Jacobs Foundation. “Innovative programs inspire and support young people as they move seamlessly toward college, financial independence, and a good career.  We find that CHA represents a superior return on investment in terms of turning donations into improved lives.”

The endowment will provide a more stable annual funding source for many decades to come. Preliminary conversations with prospective contributors to the endowment have been positive and CHA is working with CCF to create a robust fundraising strategy to reach our goal of $1.5 million in endowment funds by 2024.